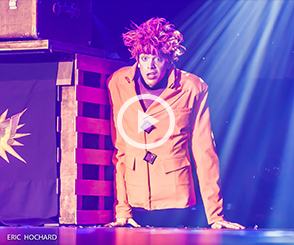 The Orange Magician considers himself a magician! But every time he tries to perform it’s a catastrophe! No panic! Jimmy is an eternel optimist and he will do anything to entertain us as he finds himself in the craziest situations, from levitating, turning into a skeleton or losing his own legs and he will always say ‘IT’S GOOD’.

The quick fire change of scenes and the impeccable timing of the effects reminds of a Tex Avery cartoon, with guaranteed success and laughter. Its an extremely visual show: grand illusions, levitation, contortion…Brussels sprouts!

Jimmy Delp nicknamed The Orange Magician arrives wearing his best Orange suit, he wants to show us his best magic tricks contained in his suitcase but hardly he greet the public that his suitcase’s playing him tricks and is hiding behind a Mysterious setting. Each time Jimmy passes through this set to try to find the suitcase his costume change color completely. A completely crazy suitcase hunt where Jimmy finds himself in more hilarious outfits ; in a funny women’s outfit, in beachwear and even in a real skeleton. Thanks to his legendary catch phrase « It’s good » he still manages to keep a good face under crowd’s laughter.

Bluffing, rhythmical, comic and extremely visual, this show is a success on social media with more than 24 million views worldwide. 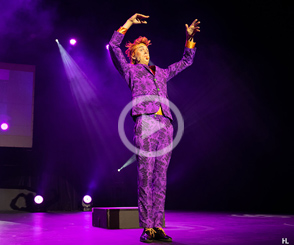 Whistles are multiplying as if by magic in the Jimmy Delp’s mouth. A simple and effective show which always lead to hysterical laughter from the public! 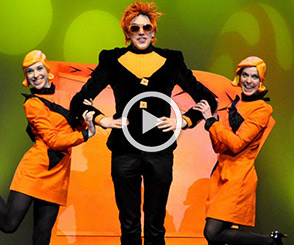 A new and original illusion that you won’t be able to ignore. As a human wheel he leaves the spectator completely gobsmacked by what happens.
Swept up in a whirlwind at fever pitch the spectator find themselves in incredible situations. He travels to Tahiti, finds himself in the arms of a pin-up model and ends up being transformed into a hen! The audience is reduced to fits of laughter. A production full of crazy twists and turns with an unexpected finale, in the masterful control of Jimmy Delp who remains true to form. 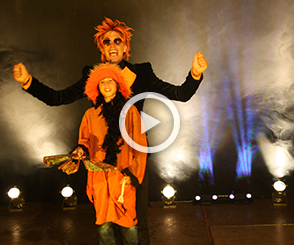 An original sketch which always gets a very successful reception. An audience-member is invited onstage and becomes a magician for the evening. Dressed in costume and hat, he is able to do magic tricks with amazing competence under the supervision of Jimmy Delp’s hands.
The illusion is so convincing that the audience believes the magic is coming entirely from the person invited on stage.
With a pace that rises to a crescendo, the situation becomes crazily out of control. Laughter guaranteed.

For all audiences – shows adapted for up to 2,000 spectators
Download the .pdf version 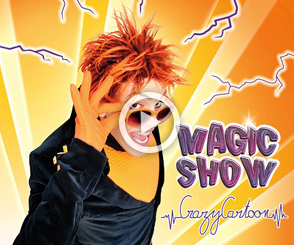 His motto, to make you see life coloured ORANGE! The colour of mad euphoria!
Discover all of the sketches from Jimmy Delp’s universe in a very different type of magic show! His arms and legs leave his body, his doves are immortal, and his suitcase has a life of its own… Amazing the audience, this subtle performer finds himself thwarted by his own magic. A frenitcally-paced show where you will find yourself an accomplice to the crazy antics of the Orange Magician , except maybe when his trademark glasses turn into sticks of dynamite… “Laughs and magic surprises, it really takes off!”

For all audiences – shows adapted for up to 2,000 spectators
Download the .pdf version